The Benton Harbor Housing Commission was formed in October of 1949 with the first Commissioners; Comm. Butzbaugh, Comm. Sheffer, Comm. Ormiston, Comm. Cook and Comm. Daggitt appointed by the Honorable Mayor Leon Gideon in November of that same year.

The first Board Meeting was held at City Hall on December 1, 1949. During this meeting the By-Laws, many of which the Housing Commission still uphold were created. In March of 1950 Mr. Ted H. Agens was hired as the first Executive Director, a salaried position at $4,000.00 a year. He went on to serve in that capacity for twelve years.

In 1950, fifteen acres of land was purchased by the Housing Commission from Mrs. Rose Corkey and in November 1951 the Seely McCord Apartments, a name which was shortly thereafter changed to the East Washington Apartments and is now known as Vineyard Complex was opened for occupancy.

The 1950s brought on the beginnings of the Civil Rights movement in America and in March of 1952 a number of Political Activist, including Mrs. Harry Lee, President of the NAACP and Religious Figures including Pastors of First Presbyterian, Second Baptist, and Progressive Baptist Churches came to the Housing Commission to protest the unwritten policy of segregation used to deny applicants of color from applying for occupancy to the McCord Apartments. Change did not come during that meeting. A letter sent to the attendees in March of that year states in part:

“It was the consensus of opinion that the action of the Executive Director, under the direction of the Housing Commission, in accepting only white applicants for the McCord Street project, as has been previously done by the Veterans Housing which is located adjacent to the McCord Street project has been the correct procedure under all of the facts and circumstances that exist at the present time.”

In June of 1952 the Benton Harbor Housing Commission opened the Fair Avenue Apartments, now known as the Buss Complex. Harbor Towers, an apartment high-rise for the elderly and disabled was given its name in 1966 and was opened for occupancy on January 15, 1968.

After the death of Mr. Ted H. Agens, Paul Allen took the reigns as Executive Director from 1962-1969. He oversaw the construction and opening of Harbor Towers and witnessed the end of racial segregation in the Housing Commission. Sammie Smith took over the top position in 1969 and served until 1982 overseeing the purchase of the first leased homes scattered throughout the city. His name will always be remembered, as the Sammie Smith Investment Center was named in his honor. However the longest term of Executive Director was that of Ms. Danethel Whitfield who served from 1982 until 2004, overseeing the development of the 10-5, 10-7, and 10-9 homes and was vital in the preliminary plans in securing the HOPE VI grant in the city of Benton Harbor.

Although Ms. Whitfield’s tenure as Director has spanned more than 20 years, however her tenure at the Benton Harbor Housing Commission is not the lengthiest.. That honor goes to Ms. Virginia Edwards who began working at the Benton Harbor Housing Commission as a Clerk-Typist on September 1, 1955. Mrs. Edwards went on to serve in many capacities until her retirement in 1995. She too will always be remembered for her hard work and dedication to Public Housing. Another name of note is Ms. Veretta Shurn who joined the Housing Commission in the 60’s and went on to train many of the current managerial staff including our then Deputy Director Ms. Juanita Gibbs.

In 2007 we have seen the complete deconstruction of the Whitfield I complex to make way for the new housing units which will be built in the coming year. We witnessed the renovation of both Harbor Towers and the Buss Complex as well as the completion of the Virginia Edward Community Center, which serves as Administrative Headquarters of the Benton Harbor Housing Commission. This multi-functional community center has additional office space, gymnasium, computer center, music room, stage area and so much more.

In 2009 the Benton Harbor Housing Commission appointed Ms. Juanita Gibbs to be the Executive Director. Ms. Gibbs is sure to carry on the good works of those who came before her.

In 2013 the Benton Harbor Housing Commission was removed from the troubled Housing List with the U.S. Department of Housing and Urban Development.

The future of the Benton Harbor Housing Commission is bright and we look forward to working closely with local, state and national officials as well as our residents to strive for an even brighter tomorrow. 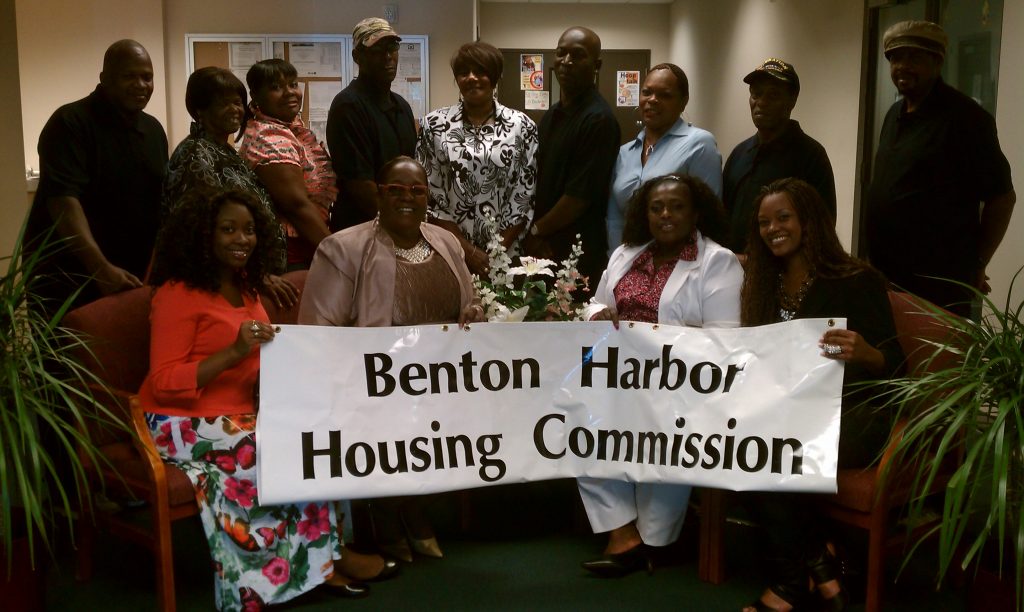 This Agency plan identifies goals and strategies to come off of the troubled housing
list and to drastically improve the community with new housing. We also plan to
improve the lives of residents if they participate in job training and acquire jobs in
the HOPE VI program and with our partner agencies.

You can voice your concerns by calling