1-II.A. OVERVIEW AND HISTORY OF THE PROGRAM
The intent of this section is to provide the public and staff with information related to the overall operation of the program. There have been many changes to the program since its inception in 1974 and a brief history of the program will assist the audience in understanding the program.

The United States Housing Act of 1937 (the Act) is responsible for the birth of federal housing program initiatives. The Act was intended to provide financial assistance to states and cities for public works projects, slum clearance and the development of affordable housing developments for low-income residents.

Under the Certificate program, federal housing assistance payments were made directly to private owners of rental housing, where this housing was made available to lower-income families. Eligible families were able to select housing in the private rental market. Assuming that the housing met certain basic physical standards of quality (housing quality standards) and was within certain HUD-established rent limitations (fair market rents), the family would be able to receive rental assistance in the housing unit. Family contribution to rent was generally set at 30 percent of the family’s adjusted income, with the remainder of the rent paid by the program.

Another unique feature of the Certificate program was that the rental assistance remained with the eligible family, if the family chose to move to another privately-owned rental unit that met program requirements (in contrast to the public housing program where the rental assistance remains with the unit, should the family decide to move). Consequently, the Certificate program was characterized as tenant-based assistance, rather than unit-based assistance.

The Housing and Community Development (HCD) Act of 1987 authorized a new version of tenant-based assistance the Section 8 Voucher program. The Voucher program was very similar to the Certificate program in that eligible families were able to select housing in the private rental market and receive assistance in that housing unit.

However, the Voucher program permitted families more options in housing selection. Rental housing still had to meet the basic housing quality standards, but there was no fair market rent limitation on rent. In addition, family contribution to rent was not set at a limit of 30 percent of adjusted income. Consequently, depending on the actual rental cost of the unit selected, a family might pay more or less than 30 percent of their adjusted income for rent.

From 1987 through 1999, public housing agencies managed both the Certificate and Voucher tenant-based assistance programs, with separate rules and requirements for each. From 1994 through 1998, HUD published a series of new rules, known as conforming rules, to more closely combine and align the two similar housing programs, to the extent permitted by the law.
In 1998, the Quality Housing and Work Responsibility Act (QHWRA) also known as the Public Housing Reform Act was signed into law. QHWRA eliminated all statutory differences between the Certificate and Voucher tenant-based programs and required that the two programs be merged into a single tenant-based assistance program, now known as the Housing Choice Voucher (HCV) program.

1-II.B. HCV PROGRAM BASICS
The purpose of the HCV program is to provide rental assistance to eligible families. The rules and regulations of the HCV program are determined by the U.S. Department of Housing and Urban Development. BHHC is afforded choices in the operation of the program which are included in BHHC’s administrative plan, a document approved by the board of commissioners of BHHC.
The HCV program offers mobility to eligible families because they may search for suitable housing anywhere in BHHC’s jurisdiction and may also be eligible to move under portability to other PHA’s jurisdictions.

1-II.B. HCV PROGRAM BASICS
The purpose of the HCV program is to provide rental assistance to eligible families. The rules and regulations of the HCV program are determined by the U.S. Department of Housing and Urban Development. BHHC is afforded choices in the operation of the program which are included in BHHC�s administrative plan, a document approved by the board of commissioners of BHHC.
The HCV program offers mobility to eligible families because they may search for suitable housing anywhere in BHHC�s jurisdiction and may also be eligible to move under portability to other PHAs� jurisdictions.

1-II.C. THE HCV PARTNERSHIPS
To administer the HCV program, BHHC enters into a contractual relationship with HUD. BHHC also enters into contractual relationships with the assisted family and the owner or landlord of the housing unit.
For the HCV program to work and be successful, all parties involved � HUD, BHHC, the owner, and the family � have important roles to play. The roles and responsibilities of all parties are defined in federal regulations and in legal documents that parties execute to participate in the program.

The chart on the following page illustrates key aspects of these relationships. 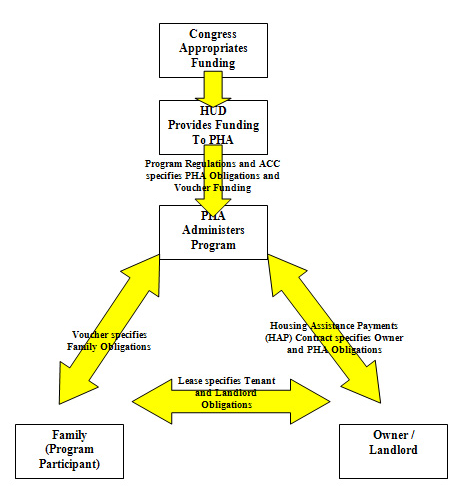 What does HUD do?
HUD has the following major responsibilities:
Develop regulations, requirements, handbooks, notices and other guidance to implement HCV housing program legislation passed by Congress;
Allocate HCV program funds to BHHC;
Provide technical assistance to BHHC on interpreting and applying HCV program requirements;
Monitor BHHC’s compliance with HCV program requirements and BHHC’s performance in program administration.
What does BHHC do?
BHHC administers the HCV program under contract with HUD and has the following major responsibilities:
Establish local policies;
Review applications from interested applicant families to determine whether applicants are eligible for the program;
Maintain waiting list and select families for admission;
Issue voucher to selected family and, if necessary, assist the family in finding a place to live;
Conduct outreach to owners, with special attention to owners outside areas of poverty or minority concentration;
Approve the rental unit (including assuring compliance with housing quality standards and rent reasonableness), the owner, and the tenancy;
Make housing assistance payments to the owner in a timely manner;
Ensure that families and their rental units continue to qualify under the program;
Ensure that owners and families comply with program rules;
Provide families and owners with prompt, professional service;
Comply with all fair housing and equal opportunity requirements, HUD regulations and requirements, the Annual Contributions Contract, HUD-approved applications for funding, BHHC’s administrative plan, and other applicable federal, state and local laws.

What does the Owner do?
The owner has the following major responsibilities:
Screen families who apply for tenancy, to determine if they will be good renters.
– BHHC can provide some information to the owner, but the primary responsibility for tenant screening rests with the owner.
– The owner should consider family background factors such as rent and bill-paying history, history of caring for property, respecting the rights of others to peaceful enjoyment of the property, compliance with essential conditions of tenancy, whether the family is engaging in drug-related criminal activity or other criminal activity that might threaten others.
Comply with the terms of the Housing Assistance Payments contract, executed with BHHC;
Comply with all applicable fair housing laws and discriminate against no one;
Maintain the housing unit by making necessary repairs in a timely manner;
Collect rent due from the assisted family and otherwise comply with and enforce provisions of the dwelling lease.

What does the Family do?
The family has the following responsibilities:
Provide BHHC with complete and accurate information, determined by BHHC to be necessary for administration of the program;
Make their best and most timely efforts to find a place to live that is suitable for them and that qualifies for the program;
Attend all appointments scheduled by BHHC;
Allow BHHC to inspect the unit at reasonable times and after reasonable notice;
Take responsibility for care of the housing unit, including any violations of housing quality standards caused by the family;
Comply with the terms of the lease with the owner;
Comply with the family obligations of the voucher;
Not commit serious or repeated violations of the lease;
Not engage in drug-related or violent criminal activity;
Notify BHHC and the owner before moving or terminating the lease;
Use the assisted unit only for residence and as the sole residence of the family. Not sublet the unit, assign the lease, or have any interest in the unit;
Promptly notify BHHC of any changes in family composition;
Not commit fraud, bribery, or any other corrupt or criminal act in connection with any housing programs.
If all parties fulfill their obligations in a professional and timely manner, the program responsibilities will be fulfilled effectively.

You can voice your concerns by calling